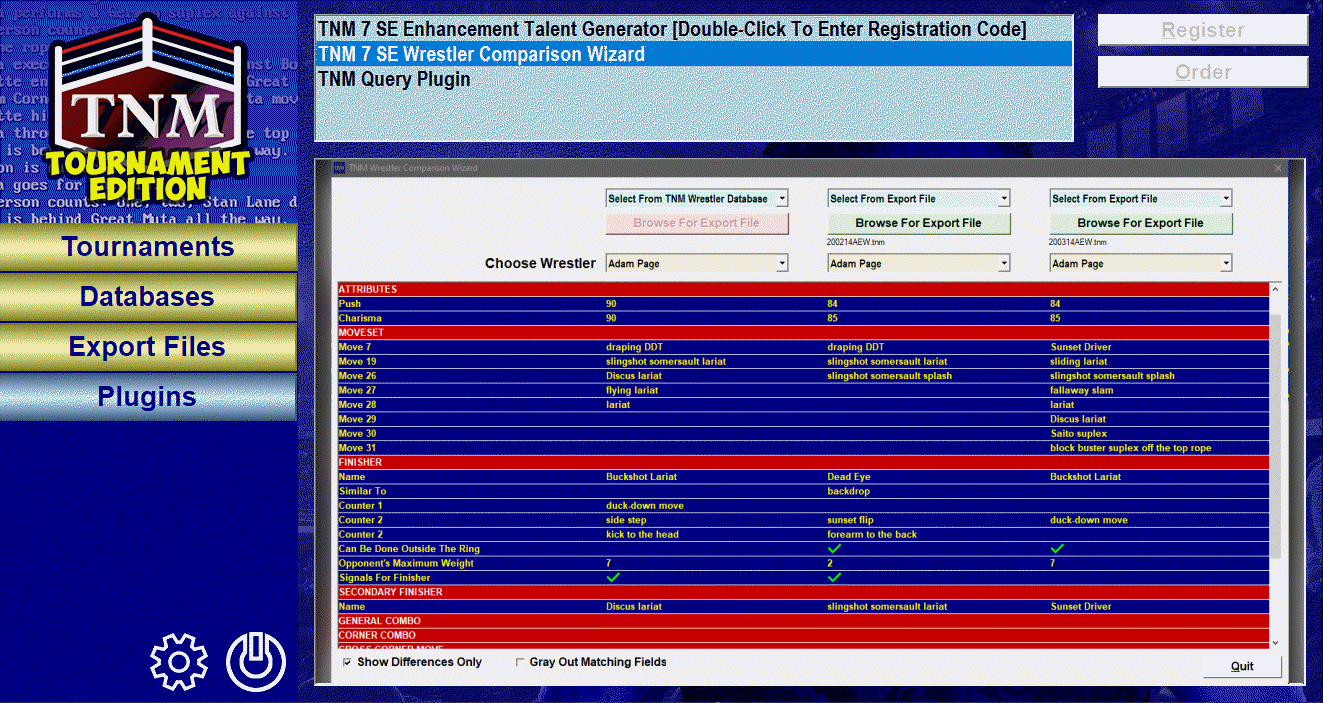 TNM Tournament Edition Build 2 introduces a bunch of exciting new features, including a new tournament type and the ability to create trios tournaments. 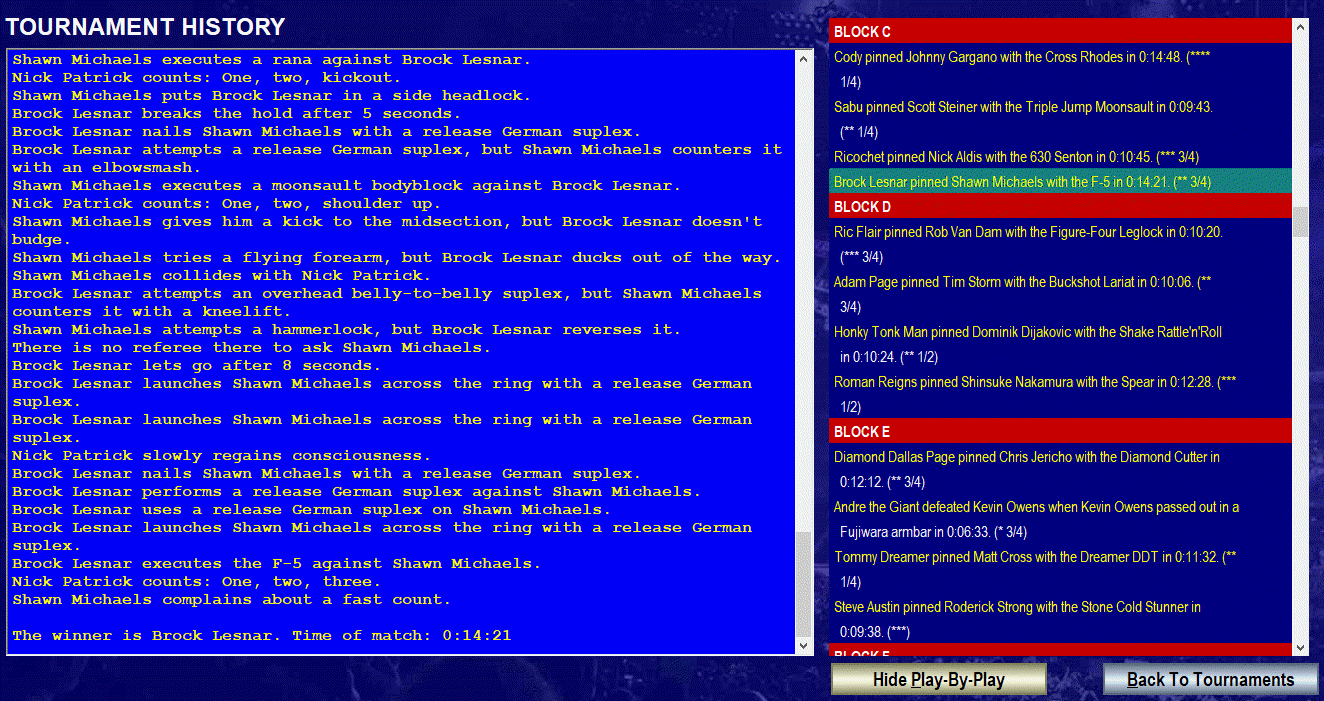 It's been three months since the release of TNM Tournament Edition and we've stayed busy listening to your requets and creating those new features which you had requested the most. And yes, that includes the thing requested more than anything else: the ability to go back and revisit what exactly happened in your tournament matches.

TNM TE Build 2 retains every match's full play-by-play, for every round of every tournament ever played so you can go back and relive the action whenever you choose.

You will find the stored play-by-play in the ''Tournament History'' section which you can access by selecting a tournament and then clicking the looking glass icon above the tournament list. 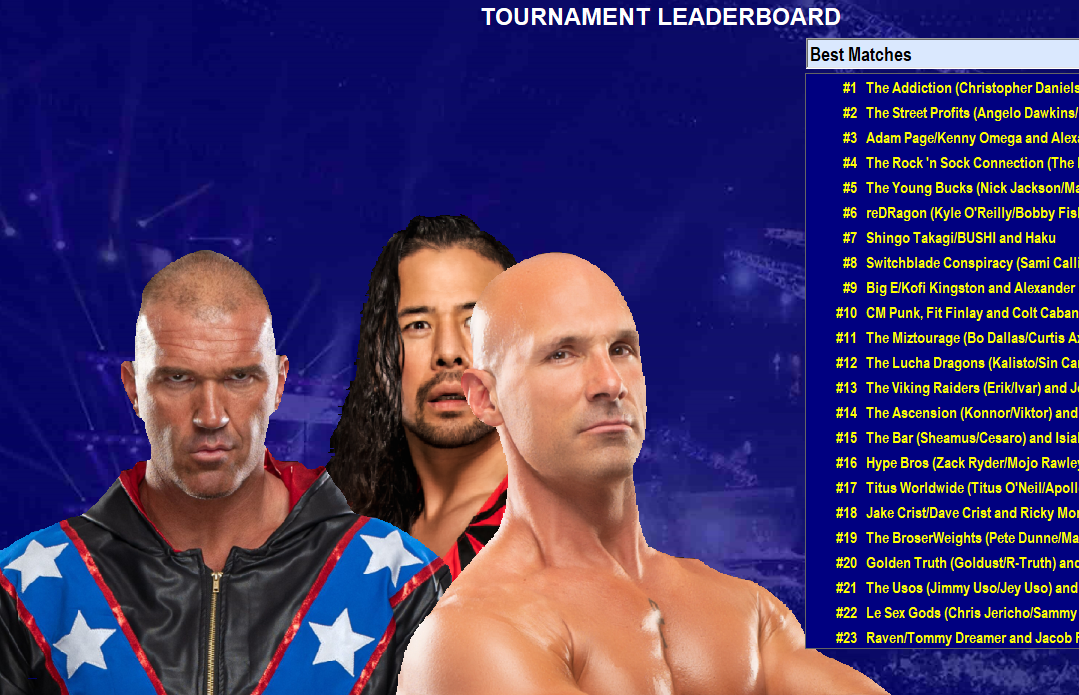 We are also introducing Trios Tournaments to TNM TE as an additional option next to Singles and Tag Team Tournaments.

This new team size introduced a few visual challenges because the Tournament Leaderboard screen didn't have the available space to put three wrestlers side-by-side, necessitating staggering the wrestler images with two in the foreground and one centered behind the others.

Since every wrestler poses differently in their pictures, this tended to look awkward because if one of the wrestlers happened to be partially turned to one side, there was a high likelihood he was going to be obscured by or obscuring one of the other wrestlers in the image. 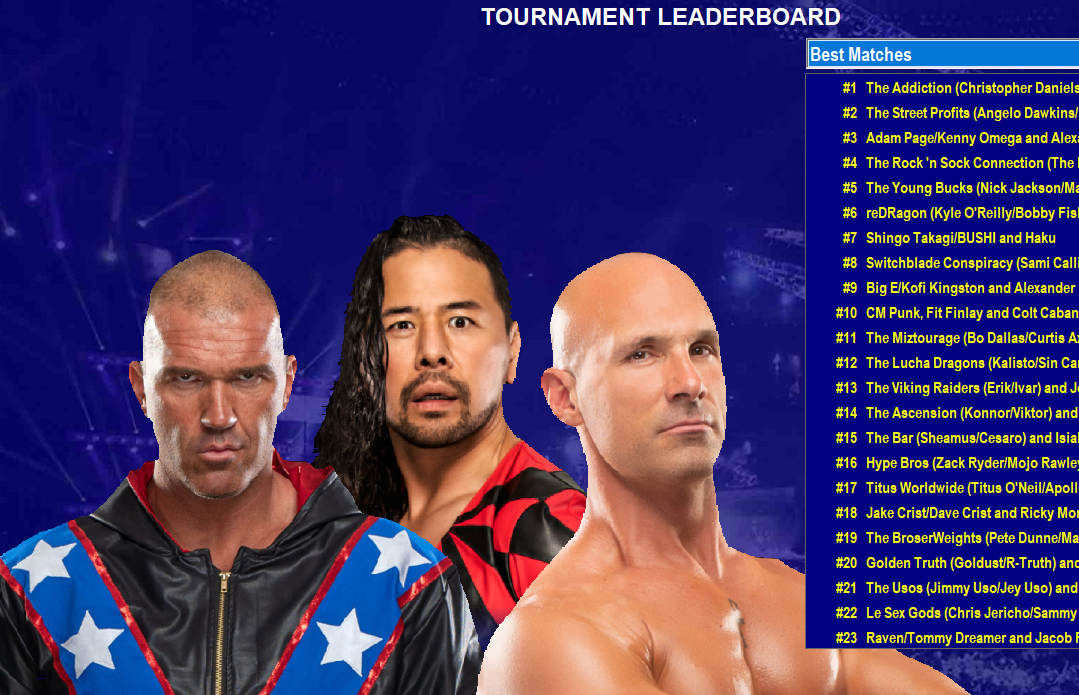 That wasn't good enough so an AI-assisted algorithm was implemented which identified where the wrestler's face is compared to the center of his stored image.

All images were then moved left or right by that same distance to compensate for this bias. You can see the before shot above and the after shot next to this paragraph.

If you haven't added wrestler images to your TNM TE installation yet, I highly recommend it because they make a world of difference in terms of immersion. 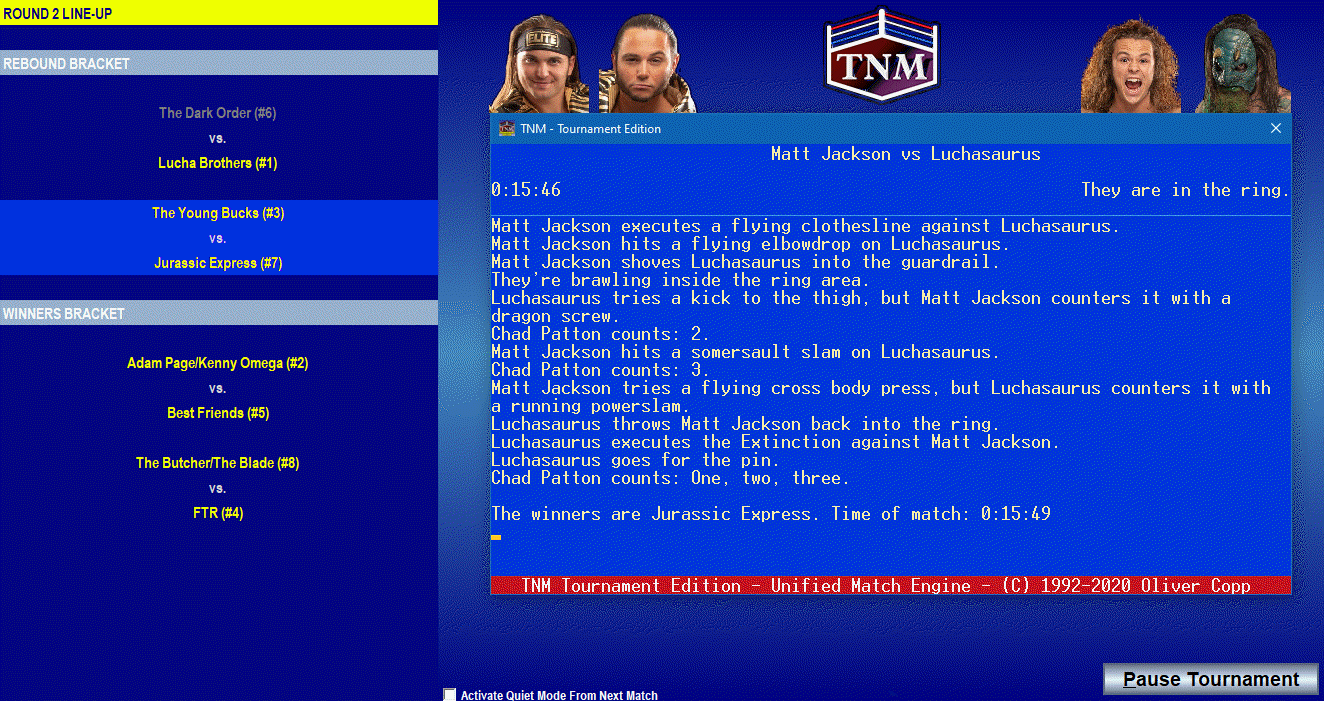 Build 2 also sees the debut of a new tournament type, the Double Elimination Tournament. As the name implies, you have to lose twice to be eliminated from this type of tournament.

If you lose a match, you end up in the Rebound Bracket where you will fight to stay alive. Lose again and you are gone, keep winning and you will ultimately face the winner of the Winners Block in the tournament final. 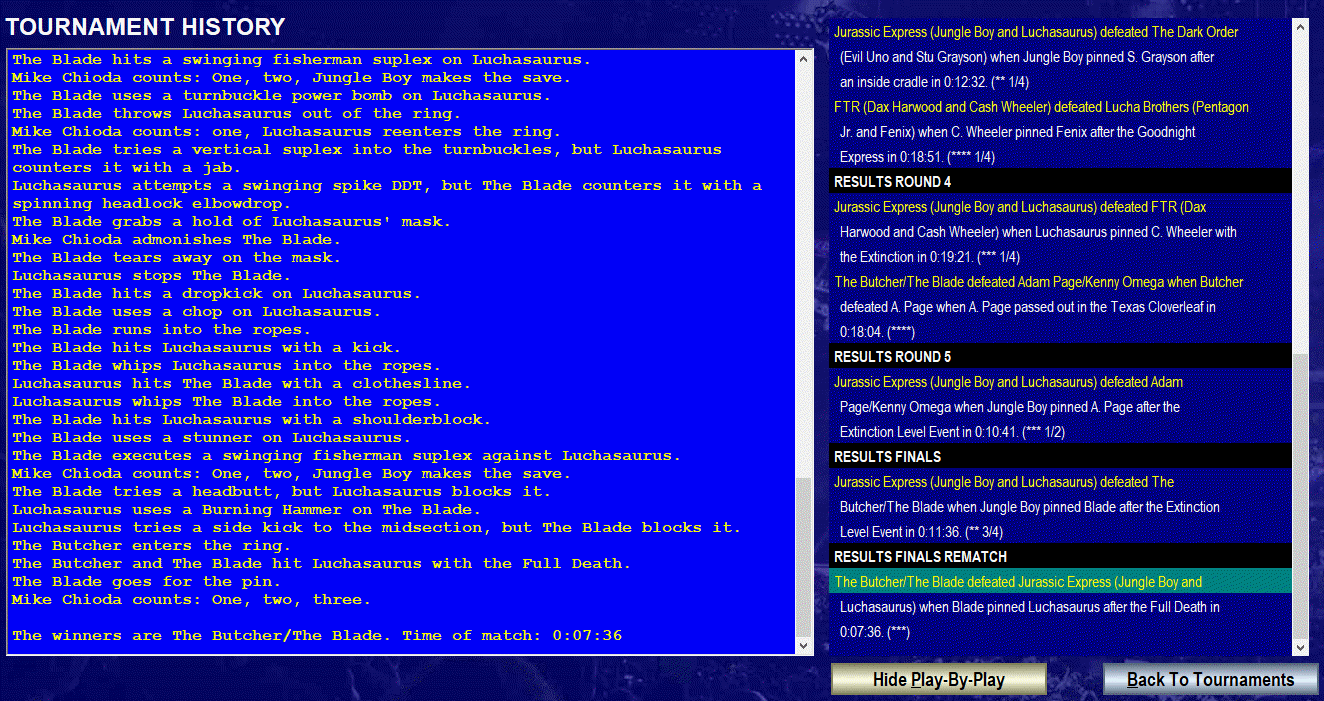 One peculiarity of the Double Elimination Tournament is that since you have to lose twice to be eliminated, there can actually be two finales back-to-back.

It's a really exciting tournament type but due to the fairly complex scheduling rules, it has only been used once in pro wrestling, when WCW was looking to crown new tag team champions in 1999. 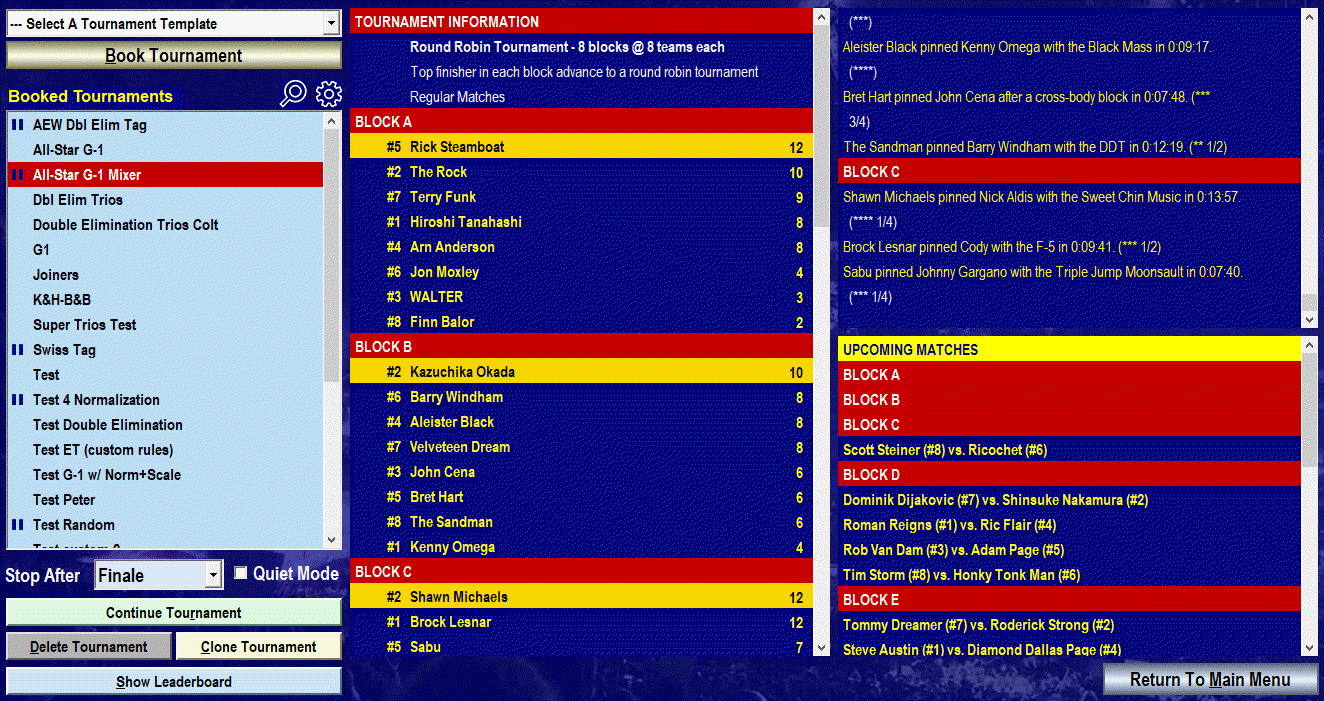 Many of you had asked for an option to edit a tournament after it had been saved, and while I won't be able to give you exactly this due to tournaments being finalized once they are saved, there is now a way to get the job done another way.

You can now take an existing tournament, clone it and edit its options and its roster before saving.

This is useful in cases where you just want to swap out a few people, change the scoring criteria or perhaps change a Singles Tournament into a Tag Tournament or vice versa. Or perhaps you had previously booked a curated Tag Tournament and want to add one wrestler per team to create a Trios Tournament. TNM TE supports this now.

So if you're dead set on editing an existing tournament, clone it, edit what you want to edit, save and then delete the original one. Same result, different path. 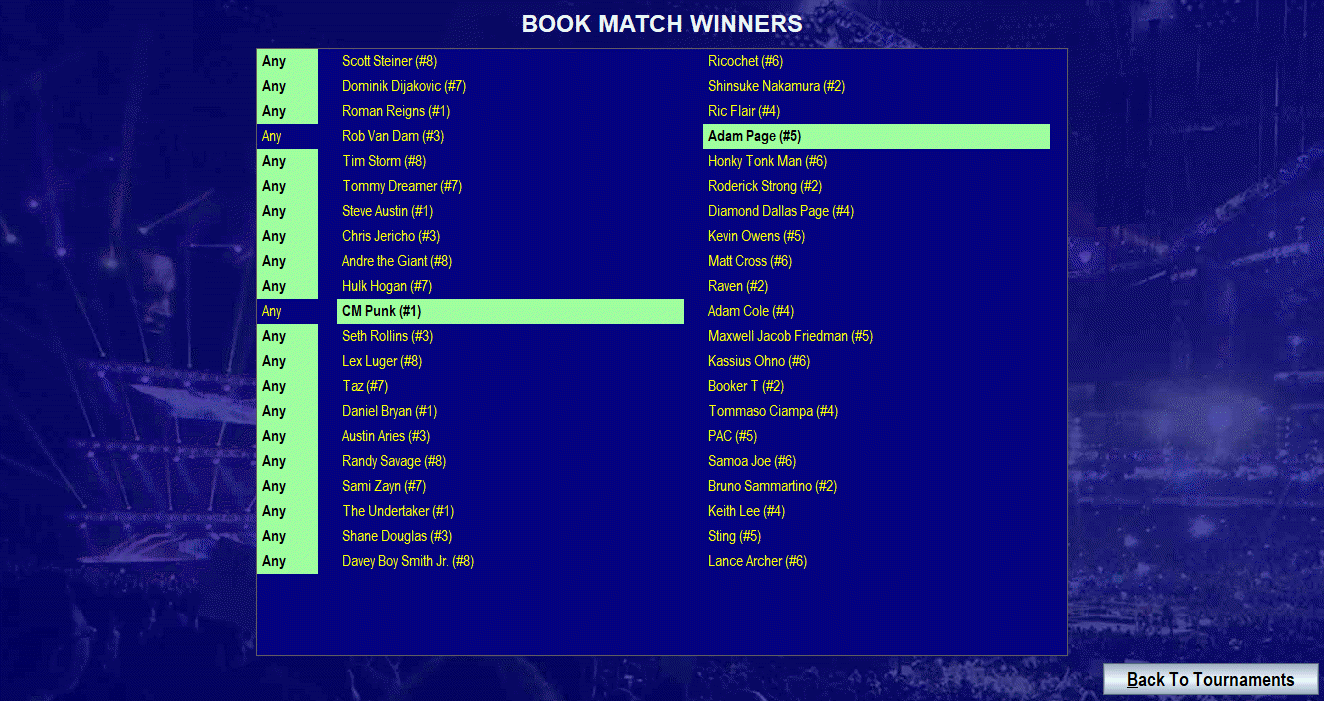 Beginning with Build 2, you can now tip the scales in favor of certain wrestlers by booking them to win their match in a particular round.

To do this, double-click the list of upcoming matches and simply click the participant you wish to get the win. It's as simple as that.

This is particularly useful when you're skipping over the early rounds of a tournament and don't care what happens as long as certain matches end with a particular winner. 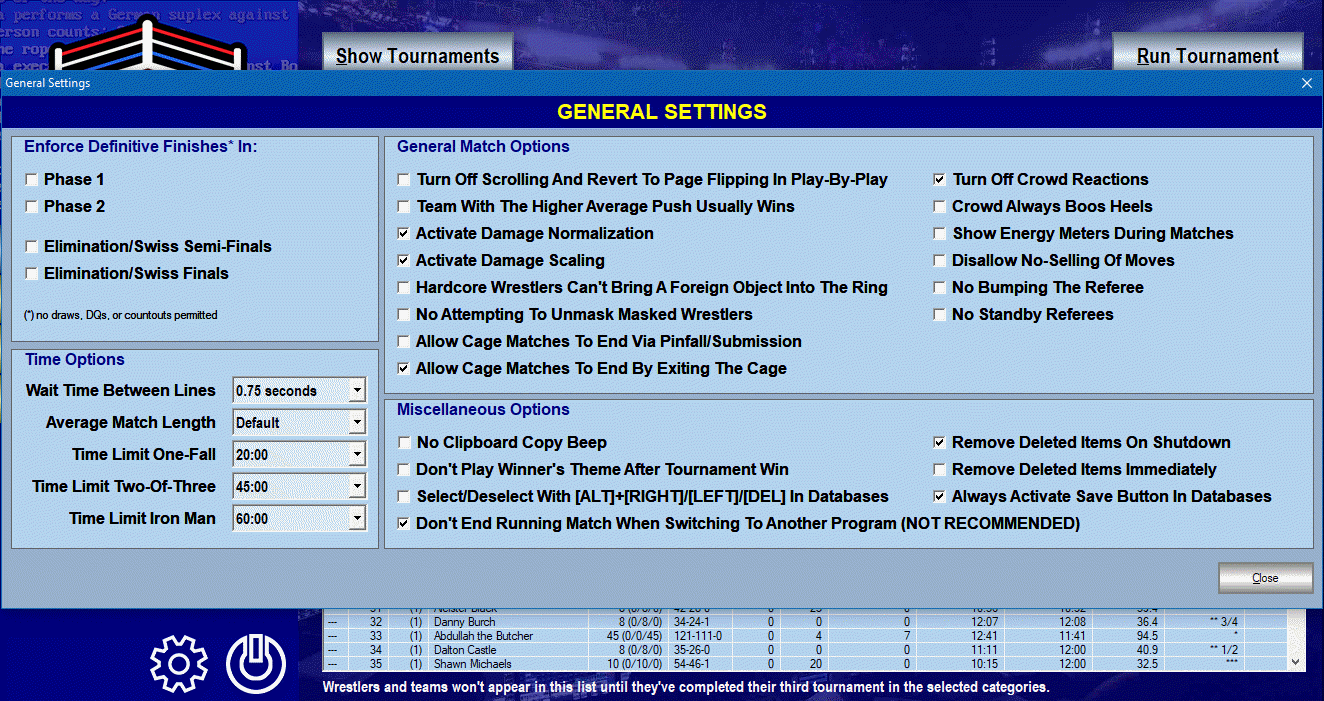 In Build 12 of TNM 7 Second Edition, we introduced two new options which have been praised by members of the community as ''absolute game-changers''.

These options are Damage Normalization and Damage Scaling.

Think of Damage Normalization as an equalizer which puts modern wrestlers with their high-impact movesets and legends of the past with their more basic offense on a level playing field. Without this option, the legends will usually get blown out of the water which takes the fun out of cross-generation bouts.

Damage Scaling in short will make overmatched wrestlers lose more quickly. As many of you know, the TNM Match Engine was designed to generate competitive matches. But sometimes you just want to have Brock Lesnar cut through Marko Stunt like a hot knife through butter, and this is what Damage Scaling promotes. 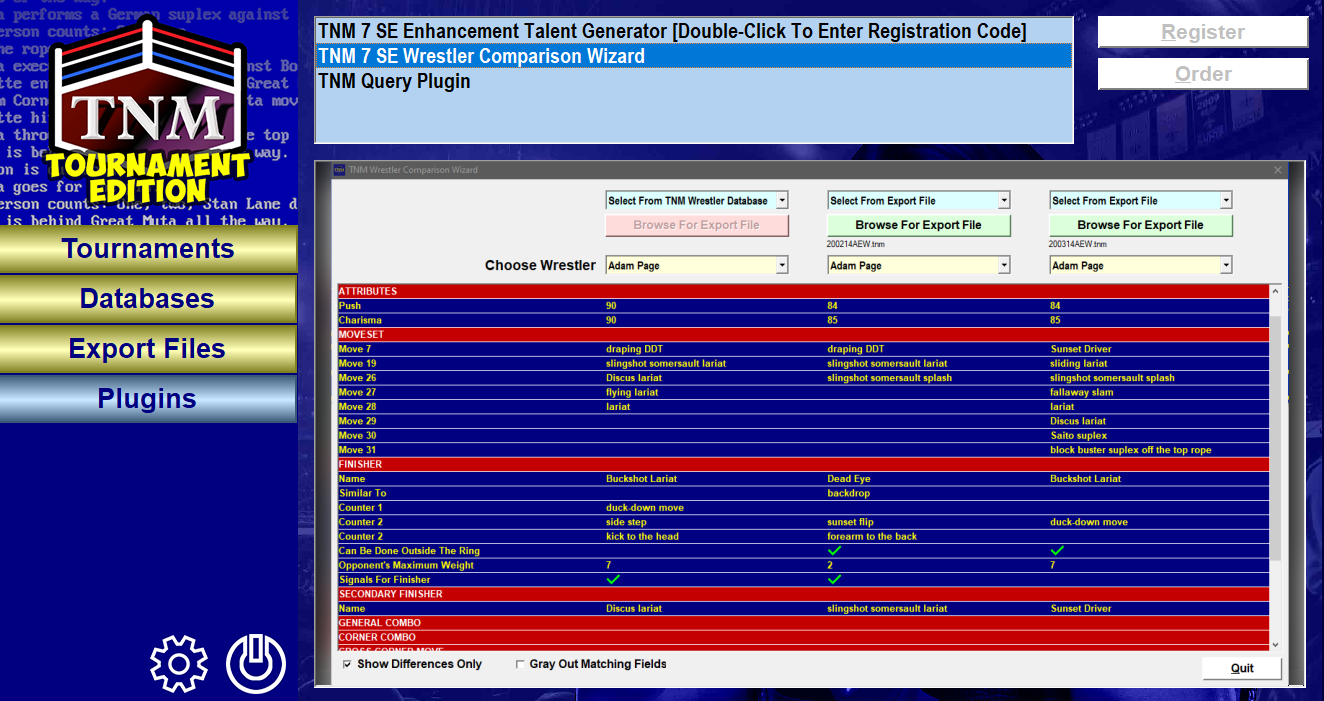 Most of you own a copy of TNM 7 Second Edition and many of you have previously purchased plugins for that simulator.

Build 2 introduces plugins to TNM Tournament Edition, and you can use your plugin registration codes on a registered version of TNM TE as well without repurchasing.

Installing plugins is quick and easy: Just drop the plugin ZIP files (one or multiple in one go) onto the TNM TE program window and you're good to go. Traditionalists can also unzip them to the NEWPLUGS folder instead if they so choose.

As of this writing, two TNM 7 SE plugins have been certified as being compatible with TNM TE: 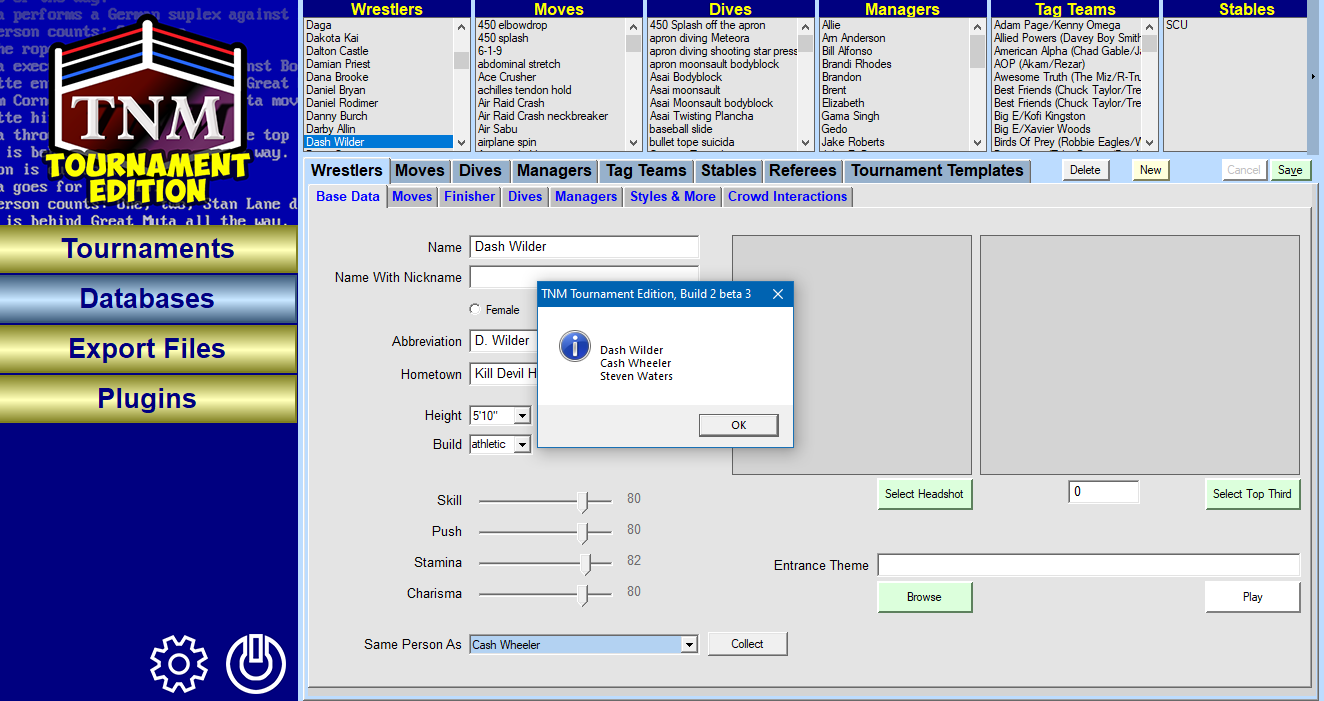 TNM is all about options. A lot of people love the idea of having different iterations of the same wrestler in their database and having those iterations potentially end up in the same tournament or even the same match.

After all - who wouldn't want to see Cactus Jack and Dude Love take on Mankind and Mick Foley? Well... turns out there are quite a few people who do not want this to happen.

Build 2 introduces a solution to this problem. If you have multiple instances of the same wrestler in your database, just link them together via the new ''Same Person As'' field.

Or you could say Mankind is Mick Foley, Cactus Jack is Dude Love and Dude Love is Mankind.

As long as you have N characters and link N-1 of them together, only one will be added to tournaments when you click ''Fill Open Spots''.